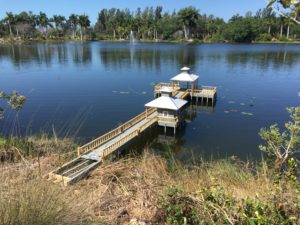 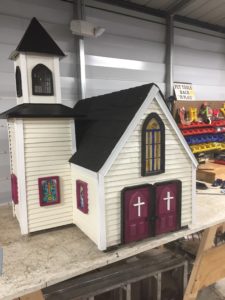 The Railroad Museum of South Florida’s Train Village miniature railroad at Lakes Regional Park, South Fort Myers has been operating since December of 1994. Operating as Lakes Park and Gulf Railroad, the 1/8 th scale trains run on a 7.5 inch gauge track that takes riders for about a mile ride around a lake to the north section of the park.

The trains travel past four full size operating grade crossing signals, through a 100’ tunnel (with lights and sound), by a waterfall, operating windmill, goes over a 20’ trestle and a 20’ pedestrian bridge. Along the way, the train passes numerous scale sized buildings that make up the villages along the route, many providing historical perspective in depicting local Southwest Florida communities as they were circa 1950.

From mid-October through October 31st, and again from mid-December to December 30th of every year, the Train Village route comes alive with holiday decorations and lighting for our nighttime rides! Our volunteers spend hundreds of hours decorating the entire route with tens of thousands of lights and decorations, including our famous “Dancing Lights” synchronized to music, creating a truly spectacular display unique in Southwest Florida.

Our fleet of eight locomotives provide the pulling power for the four trains that make up the passenger car rolling stock of the railroad. Typically, one train is operated to handle the daily schedule, but additional trains are added to meet demand at peak periods, and as many as four trains run continuously for our Halloween and Christmas night events. A new locomotive was rolled out in late 2017.