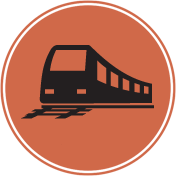 Lakes Park, Railroad Museum of South Florida and the trains are closed until further notice

The Railroad Museum of South Florida’s Train Village miniature railroad at Lakes Regional Park, South Fort Myers has been operating since December of 1994. Operating as Lakes Park and Gulf Railroad, the 1/8th scale trains run on a 7.5 inch gauge track that takes riders for about a mile-long ride around a lake and through the north end of the park.
The trains travel past four full size operating grade crossing signals, through a 100’ tunnel (with lights and sound), by a waterfall, operating windmill, goes over a 20’ trestle and a 20’ pedestrian bridge. Along the way, the train passes numerous scale sized buildings that make up the villages along the route, many providing historical perspective in depicting local Southwest Florida communities as they were circa 1950. 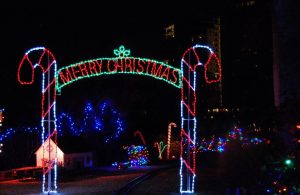 From mid-October through October 31st, and again from mid-December to December 30th of every year, the Train Village route comes alive with holiday decorations and lighting for our nighttime rides! Our volunteers spend hundreds of hours decorating the entire route with tens of thousands of lights and decorations, including our famous “Dancing Lights” synchronized to music, creating a truly spectacular display unique in Southwest Florida.

Our fleet of eight locomotives provide the pulling power for the four trains that make up the passenger car rolling stock of the railroad. Each six-car passenger train has 17 comfortable passenger seats, and each seat includes a cushioned bench area in front of it, to accommodate small children riding with an adult.  Typically, one train is operated to handle the daily schedule, but additional trains are added to meet demand at peak periods, and as many as four trains run continuously for our Halloween and Christmas night-time events. Our new 2017 locomotive is rolled out in November of 2017, and a fifth passenger train is planned for 2018. 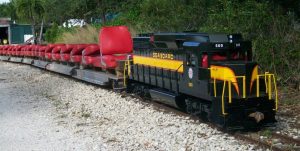 Each locomotive is powered by a 16 or 16.5 horsepower, two-cylinder, four-stroke gasoline engine (much like those typically used in larger riding lawn mowers) which in turn powers the hydraulic motors which make the train go.  The train’s steel wheels, running on the steel rails, make it inherently fuel-efficient; a fully-loaded train can weigh more than four tons, but the locomotives pull them easily, using an average of less than eight ounces of fuel per round trip!

After being closed for over a year, the RRMSF resumed train rides on May 23, 2021.  Local television station, WINK, aired a segment on our reopening.  Here is a link to that broadcast –

We are encouraging guests who are not vaccinated to wear a mask when entering the museum or riding the train. Free masks are provided. Hope to see you soon!!!

The train will continue to operate for all ticketed passengers waiting in line until everyone is accommodated. We are required to suspend operations during thunderstorms and other unforeseen eventualities, such as mechanical difficulties.

Normally our trains leave the station every 30 minutes, on the hour and half-hour. Boarding begins 5 minutes prior to departure time, on a first-come, first-served basis at the station boarding area.

Trains do run on most rainy days in between rainfall, but unexpected closures may occur at any time due to inclement weather (especially when lightning is possible).

Train delays may also be caused by wind-blown debris or obstructions on the track; these delays are rare.

Sorry, infants under 1 year, pregnant women and persons weighing more than 250 pounds may not ride the train.