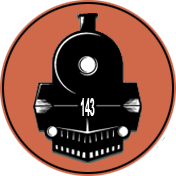 Lakes Park, Railroad Museum of South Florida and the trains are closed until further notice

Baldwin Locomotive Works of Philadelphia, PA built the #143 in 1905. ACL #143 was a part of a large order of locomotives placed by the Atlantic Coast Line Railroad. It is a 0-6-0 type, class E-4. The locomotive was used at various locations on the ACL system in the southeastern U.S. The 0-6-0-type switch engine was used to make up trains in rail yards and do local spotting of cars to industry.

In 1944, the #143 was sold to the American Agricultural and Chemical Company of Pierce, FL. There the locomotive was put to use in the phosphate mine industry hauling trains from the mines to the main line railroads. It finished its operational career in 1959. It was subsequently put on display outside the Company’s office in Pierce. From there it went to a short-lived tourist line in Trilby, FL. In 1974, the locomotive was donated to the Tampa Bay Chapter of the National Railway Historical Society and moved to San Antonio, FL. In 1979, it was donated to a private citizen and moved to Tampa. The #143 was then acquired by the Florida Gulf Coast Railroad Museum.

In 1992, the Florida Gulf Coast Museum was told to move the derelict locomotive from the storage site in Tampa. Lacking funds to move the #143, the FGCR offered the #143 to the newly established Railroad Museum of South Florida located in Ft. Myers. At a cost of $16,000, the #143 was loaded on to a truck trailer and hauled to Ft. Myers. For over two years the #143 was stored under roof at Dean Steel Buildings. It was relocated to the Railroad Museum of South Florida at the Lakes Park and Gulf Railroad Train Village in 1995. 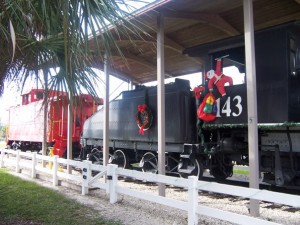 In 2001, Lee County Parks and Recreation in conjunction with the Railroad Museum of South Florida announced the completion of the cosmetic restoration of historic locomotive #143. Restoration work was performed by Great Atlantic Boiler Services of Jacksonville, FL. To facilitate the project, the work was done in phases, as funds were available. Phase one restored the tender car, phase two refurbished the rest of the locomotive, excepting the cab, and phase three work replaced the rusted out cab with a new one. Total cost was about $86,500. Work on the tender car started June of 1999. It was finished in November of 1999. Phase two & three work started in January of 2001 and work was completed on April 28th. Today, the locomotive resides at Lakes Regional Park in South Ft. Myers, just outside our museum.

Ever wonder who that Engineer is who is waving while standing on the 143? His name is Ralph Clements. He was the last person to run the 143 before it was retired. Ralph resided in Lakeland, FL until his death in 2019 at the age of 90. 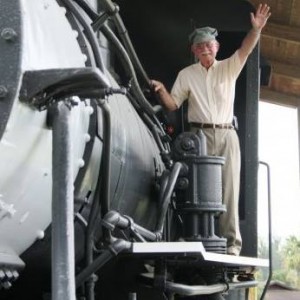 The Museum’s replacement 143/Park Railroad history sign is now in place beside locomotive 143 (Aug/2018). The original sign was put in place in 2003. The marker provides a brief history of the locomotive as well as Lakes Park’s railroad past. 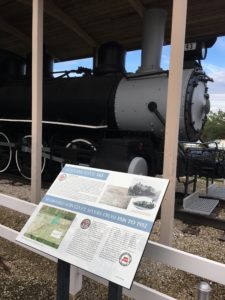 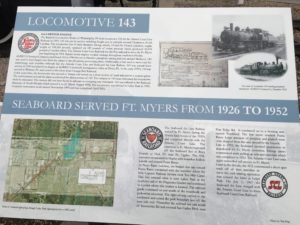